The Healing Power of Conservation in Rwanda

The Healing Power of Conservation in Rwanda

One of my lifelong dreams came true this month when Dave and I got to spend time among the mountain gorillas in Rwanda. I thought we were prepared for the experience but in reality, I’m not sure anyone can fully prepare for the flood of emotions of seeing these gentle giants in their native habitat.

Rwanda and its mountain gorillas have been through very difficult times. Decades of them, in fact. But the country has come through those times and we were met with joy and kindness throughout Rwanda. 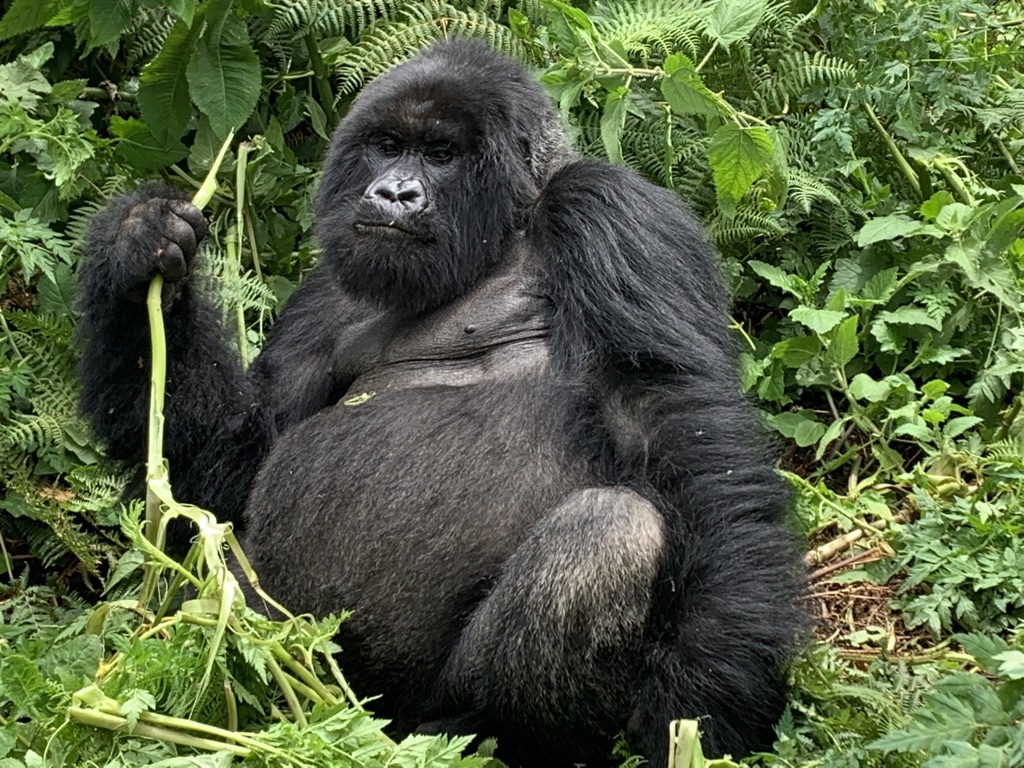 Today, people and mountain gorillas are recovering together through smartly developed ecotourism. It’s a story that few saw coming and one that we can all learn from.

Dian Fossey devoted her career to studying and protecting the mountain gorillas in the Virunga Mountains of northern Rwanda. Even though she was a somewhat controversial figure in the country, her research laid the groundwork for today’s successes. When her work began in the 1960’s, poaching, habitat loss, and political instability all threatened the gorillas’ survival. In the 1980’s, there were as few as 230 mountain gorillas in the area.

Then in 1994, Rwanda witnessed the absolute worst of humanity when genocide left a million dead and the country’s future uncertain. Now 25 years later, this East African nation has become an unlikely tourism destination by focusing on gender equality, education, universal healthcare, and safety. Thanks to smart growth plans, they have also created a national economy around conservation and ecotourism that is not only working, it’s thriving.

The view from Mount Bisoke on the ascending trek

Rwanda’s strict permit system governing gorilla treks is at the heart of how their conservation model has been so successful. Only eight trekkers a day get to see each of ten mountain gorilla families in the park and they are limited to one hour with the gorillas. This protects the animals and their habitat from over-exposure and creates high tourist demand for a gorilla permit. 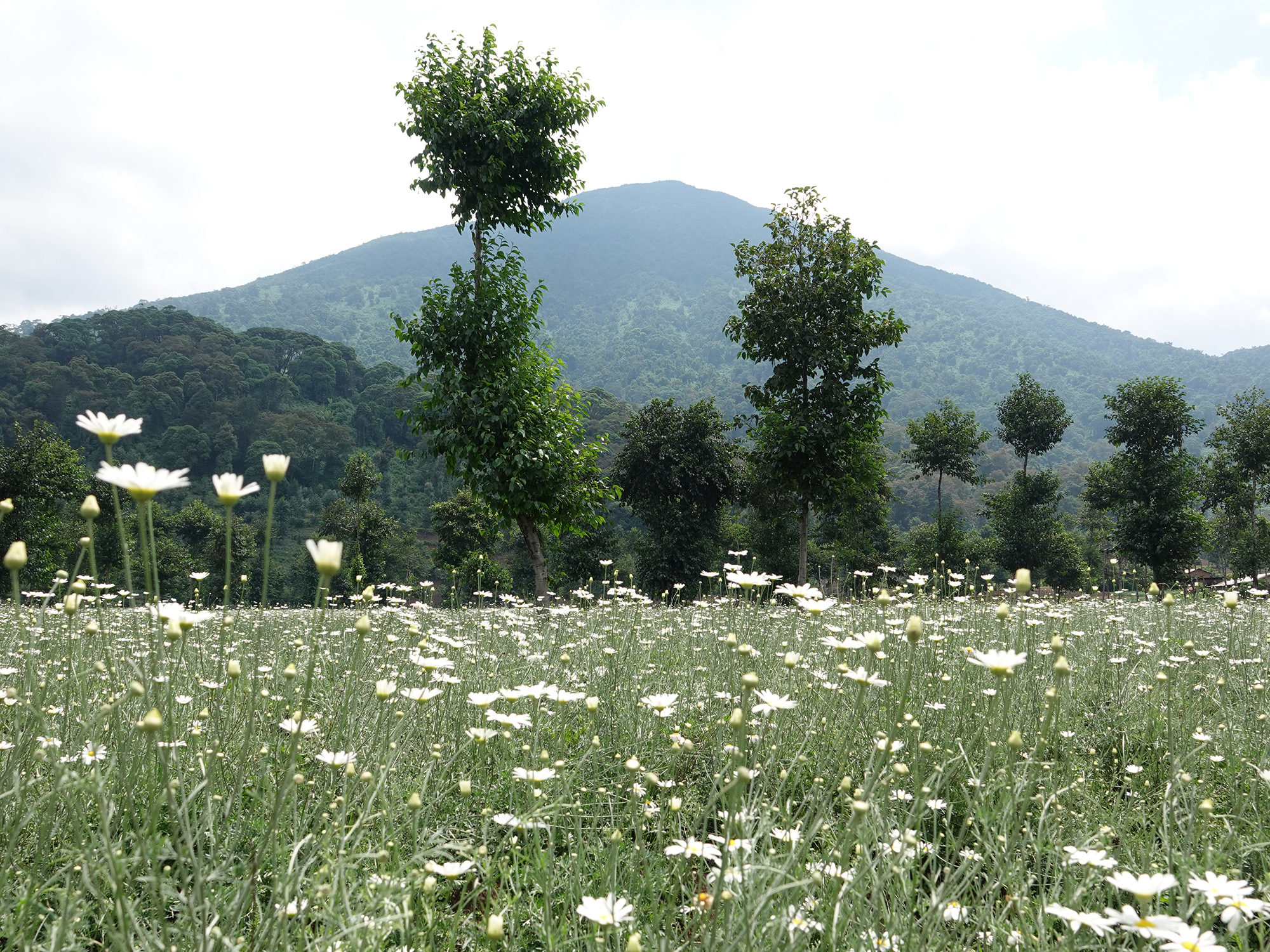 Mount Bisoke is surrounded by fields of flowers

It’s worth noting that the trek itself is difficult. It can take four to six hours of hard climbing, navigating muddy jungle trail, stinging nettle plants, and rain to find your assigned family of gorillas. That hasn’t thwarted tourists’ dreams though and it shouldn’t. There are few words other than magical and breathtaking to describe an hour among these amazingly gentle giants. 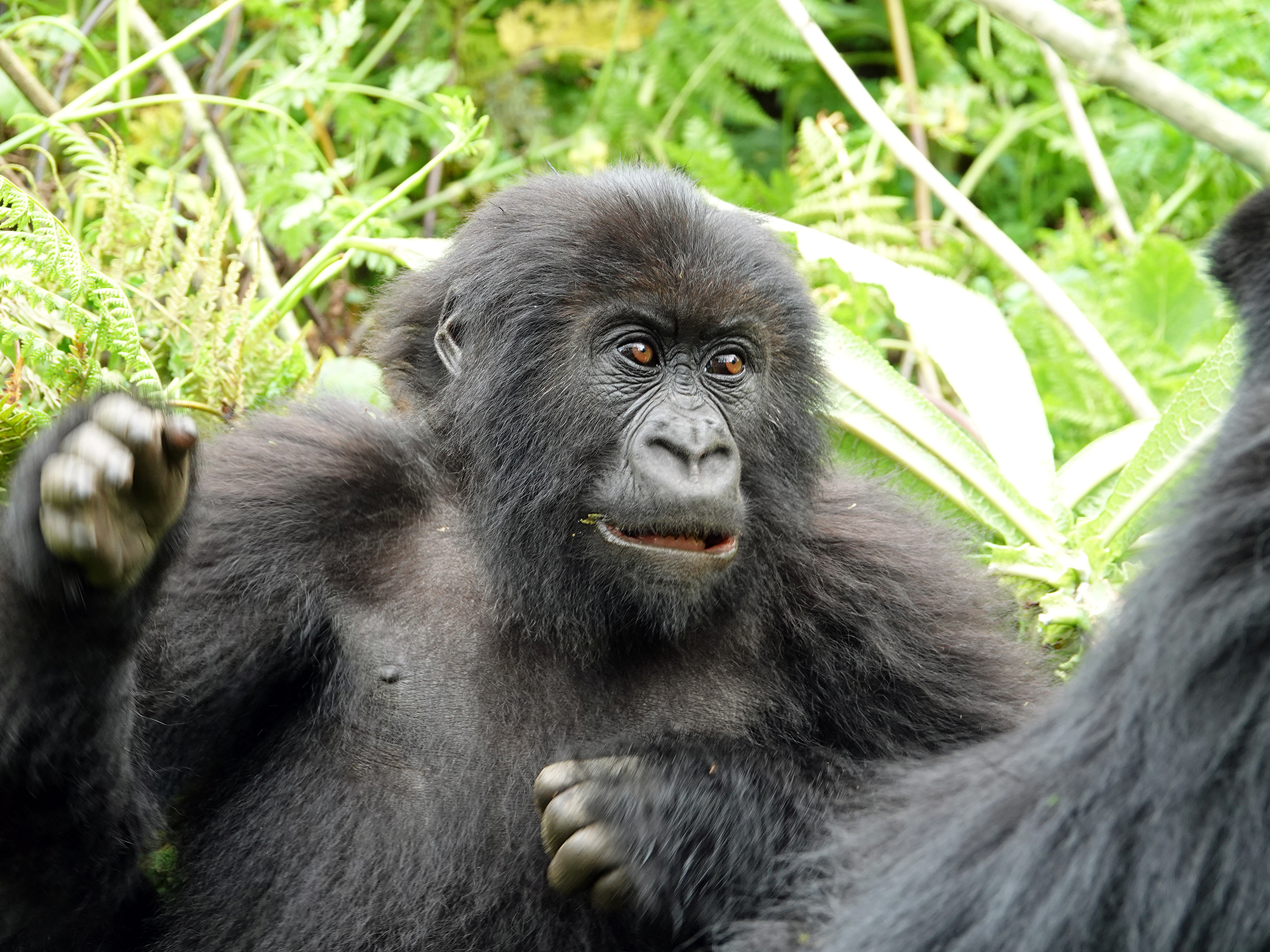 A 3-year old male mountain gorilla in the Titus family

Over the last several years, ecotourism has been growing intentionally and steadily (25-30% per year) around Rwanda’s parks. In 2018, over 15,000 gorilla permits were issued, worth approximately $20 million (USD). Local communities aren’t left out of the equation. They directly benefit from jobs, visitors, and because 20% of permit fees paid by tourists go directly back to the adjacent communities to support roads, schools, community programs and more.

In Rwanda, conservation tourism, species recovery, and community support have been happening hand-in-hand. There are now an estimated 800 mountain gorillas in the Virunga Mountains. Fossey captured our attention and made us realize how fascinating and vulnerable these animals are. But the success seen in Rwanda today though is entirely due to the vision and commitment of Rwandans.

We spent much of our time talking to people around the country to learn from them. Almost everyone we met asked us to be “ambassadors” for Rwanda–to go forth and share our experiences with others. I can’t imagine an easier job. The only hard part will be to get us to stop talking about this small country with really big ideas and an even bigger heart.

About the Author: paula

Four Reasons to Interview Your Stakeholders

A Peek Into Our Video Studio

A Peek Into Our Video Studio

The Making of a Webby-nominated StoryMap: Indigenous Life on the Nansemond River

The Making of a Webby-nominated StoryMap: Indigenous Life on the Nansemond River